McGee Side Born in England/Virginia

Archibald Clendennin Jr. Born about 1735 in Virginia (his ½ brother is our grandfather)  The hostilities at Kerr’s Creek (called “Teas Creek” in earlier Augusta County records before abt. 1750) between the Shawnee Indians and the Scotch-Irish settlers of early Augusta County came during the height of this conflict. The stories of the conflicts at Kerr’s Creek have been passed down through generations and are still discussed by the current residents of modern-day Rockbridge County. As it was told, the Shawnee leader “Cornstalk” and many of his men viciously attacked, killed or kidnapped several early settlers in the Kerr’s Creek (also called “Teas Creek”) area on two occasions in 1759 and 1763. Here the Shawnees had the time of their lives. The leading citizen of this settlement was Archibald Clendenin, who had but recently been appointed constable of the Greenbrier district. He had come over from the Cow Pasture about 1760. He had married Ann Ewing about 1756, and they brought with them their first child, Jane, born early in 1758. Two other children were born to them at the new settlement. John was about two years old at the time of the raid, the other a young baby. Clendenin was likely about twenty-eight, and was famed as a hunter. There may have been a dozen or more families comprising what was known as the Clendenin settlement, and it is reasonable to suppose they were scattered over considerable territory. Hear Holcomb: “Her (Ann Clendenin’s) story of the surprise was as follows: On the day of the capture, while she was getting dinner, a seemingly friendly Indian entered, and soon after him another, followed at intervals by still others, until the house was filled with nineteen Shawnee warriors. Then Clendenin saw their imminent danger, and determined to make his escape. Watching his chance, he darted through the open door and ran. But he was too late. Almost the same instant two Indians fired, both balls hitting him in the back, and he fell forward on his face dead.”

Joseph Hall Bishop of Norwich 1 July 1574 – 8 September 1656 story  grandfather on Gilbert Side  Cambridge  Shared grandparent of Benjamin Rush (listed on Shared page)Educated under Puritan influences at the Ashby School and the University of Cambridge (from 1589),Joseph Hall was born at Ashby-de-la-Zouch, son of John Hall and Winifred Bambridge. He was educated at Emmanuel College, Cambridge, where he was part of the University Wits. He published his Virgidemiarum, six books of  “toothless satires”, in 1597 and 1598. These verse satires were, along with those of his friend John Donne, the first English satires that followed classical models. Hall was made Bishop of Exeter in 1627, and of Norwich (1641).  In 1641, Hall published Episcopacy by Divine Right, Asserted by J. H., an attack against Smectymnuus (1641), a pamphlet against episcopacy. His mother was Winifred Bambridge, a strict puritan,(Perry 1890, p. 75)[a] whom her son compared to St Monica.[ In 1605, Hall travelled abroad for the first time when he accompanied Sir Edmund Bacon on an embassy to Spa, Hall’s devotional writings had attracted the notice of Henry, Prince of Wales, who made him one of his chaplains (1608).[3] Hall preached officially on the tenth anniversary of King James’s accession in 1613, with an assessment in An Holy Panegyrick of the Church of England flattering to the king.[5] Hall gave up verse satires and lighter forms of literature when he was ordained a minister in the Church of England.

John Laird Of Merchistoun Napier 1550 – 3 April 1617  •  L4T3-9Y7 ​ grandfather on Gilbert/McGee Side   was a Scottish landowner known as a mathematician, physicist, and 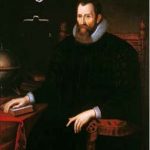 astronomer. He was the 8th Laird of Merchiston. John Napier is best known as the discoverer of logarithms. He also invented the so-called “Napier’s bones” and made common the use of the decimal point in arithmetic and mathematics. Attended St. Andrews