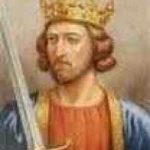 grandfather McGee Side Edward was a noted castle builder, including the northern Welsh Conway castle, Caernarvon castle, Beaumaris castle, and Harlech castle. King of England from 1272, son of Henry III (1207–72).

Mary of Guelders, Queen of Scotland

Born in France,  April 1442 – 9 April 1483  •  9CNK-BFD ​Grandfather McGee Side Even at the age of nineteen, Edward exhibited remarkable military acumen. He also had a notable physique and was described as handsome and affable. His height is estimated at 6 feet 4.5 inches (1.943 m), making him the tallest among all English, Scottish, and British monarchs to date. Edward was an extremely capable and daring military commander. He crushed the House of Lancaster in a series of spectacular military victories, and he was never defeated on the field of battle. Burial St George’s Chapel, Windsor Castle, Berkshire, England.

Jacquetta Duchess of Bedford Luxembourg 1415 – 30 May 1472  •  Grandmother Stewart Side born in Luxembourg.

Wife of King James Above:
Mary of Guelders, Queen Consort of Scotland grandmother McGee Side.