4 January 1746 – 19 April 1813  •  LVMM-S2V ​ Signed declaration of independence we share grandparents on Gilbert Side  was a Founding Father of the United States. Rush was a civic leader in Philadelphia, where he was a physician, politician, social reformer, humanitarian, and educator as well as the founder of Dickinson College. Rush attended the Continental Congress and signed the Declaration of Independence.

George Gordon 1562 – 13 June 1636 •  LZGB-32F ​ 1st Marquess of Huntly (1562 – 13 June 1636) was a Scottish nobleman who took a leading role in the political and military life of Scotland in the late 16th century. Huntly married Henrietta Stewart, daughter of Esmé Stewart and Catherine de Balsac, on 21 July 1581. He was the father of Mary Gordon, who married William Douglas, 1st Marquess of Douglas. We share grandparent to David Murray aka 7th Laird of Tullibardine

Mother of below Victoria.

1859 –deceased  LCD9-994 ​ Emperor of Germany shared grandparents/McGee Douglass Side Born in Germany. Last German Emperor (Kaiser) and King of Prussia  He was the eldest grandchild of the British Queen Victoria 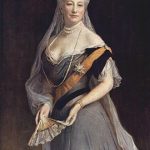 McGee Cardwell side General William Howe, 5th Viscount Howe, KB, PC (10 August 1729 – 12 July 1814) was a British Army officer who rose to become Commander-in-Chief of British forces during the American War of Independence. Howe was one of three brothers who had distinguished military careers.

baron. He was invested as a Knight in 1599. He was created 1st Baronet Booth, of Dunham Massey, co. Chester [England] on 22 May 1611 He held the office of Sheriff of Lancashire

George’s extensive estates were placed by Queen Elizabeth during his minority under the guardianship of her favourite, Robert Dudley, Earl of Leicester. In the latter end of Her Majesty’s reign, Sir George received the honour of knighthood, and upon the institution of the order of baronet, he was amongst the first raised to that dignity, on 22 May 1611. When his father Sir William died in 1579 at only 39, he left a vast and valuable estate.  He held over 2000 acres of arable land in Sinderland, Bowden, parlington, Dunham, Sale & Timperley, extending as far as Wilmslow, dean Row, Pownall fee And Styal and out to Staley , now known as Staleybridge. This holding included  4 Manors and 58 dwellings and on its own was a rich estate. In addition there was also the reversions which meant all benefits , lands etc held by relatives revert back to the owner on their death. This meant an additional 3000 acres and a further 38 dwellings. In all the estate now comprised 5400 acres with Manors and dwellings. In 1611 more than 10 years after receiving his knighthood, Kings James I promoted George to Baronet.   King James I conceived the idea of creating a new type of honour, the Baronet. As knighthoods could not be inherited, unlike the five grades of the peerage, which were all hereditary, King James realised that he could extract money from suitable knights by creating a hereditary knighthood whereby the eldest surviving son could inherit the title. Income was generated for the crown by charging a fee for this honour whether the honour was accepted or not.  Sir George was honoured by being included in the very first Ten Baronetcies created. It was shortly after this time that Sir George 1st Baronet conceived the idea of building a new mansion within the parkland of Dunham. The Booths had resided at Dunham Massey since the mid-fifteenth century and had long been prominent in Cheshire affairs.9 Booth himself was the eldest son of Sir George Booth, one of the most influential county figures during the first half of the seventeenth century.10 Educated at Cambridge link